Havells Celebrates the Glory of Maa Durga in Kolkata

Goddess Durga, who is believed to be the manifestation of Shakti (supreme power), is one of the most revered gods of the Hindus. Known by innumerable names, such as, Adi Parashakti, Devi, Shakti, Bhavani, Parvati, Amba, Yogmaya and many more, Maa Durga is the warrior goddess who is said to combat evils and demonic forces. If we go by the tradition of Hinduism, she is equated with the ultimate reality asserting her as the Supreme Being and the creator of the universe.

Also known as Durgotsava, Durga Pooja is an annual Hindu festival that is celebrated with much revelry in India. The festival, though observed in many states, is highly celebrated in the state of West Bengal where elaborate stage decorations (pandals) are made. It is observed in the Hindu calendar month of Ashvin, which generally falls in the months of September or October. This multi-day festival features detailed decorations, scripture recitation, performance arts, festivities, and processions. 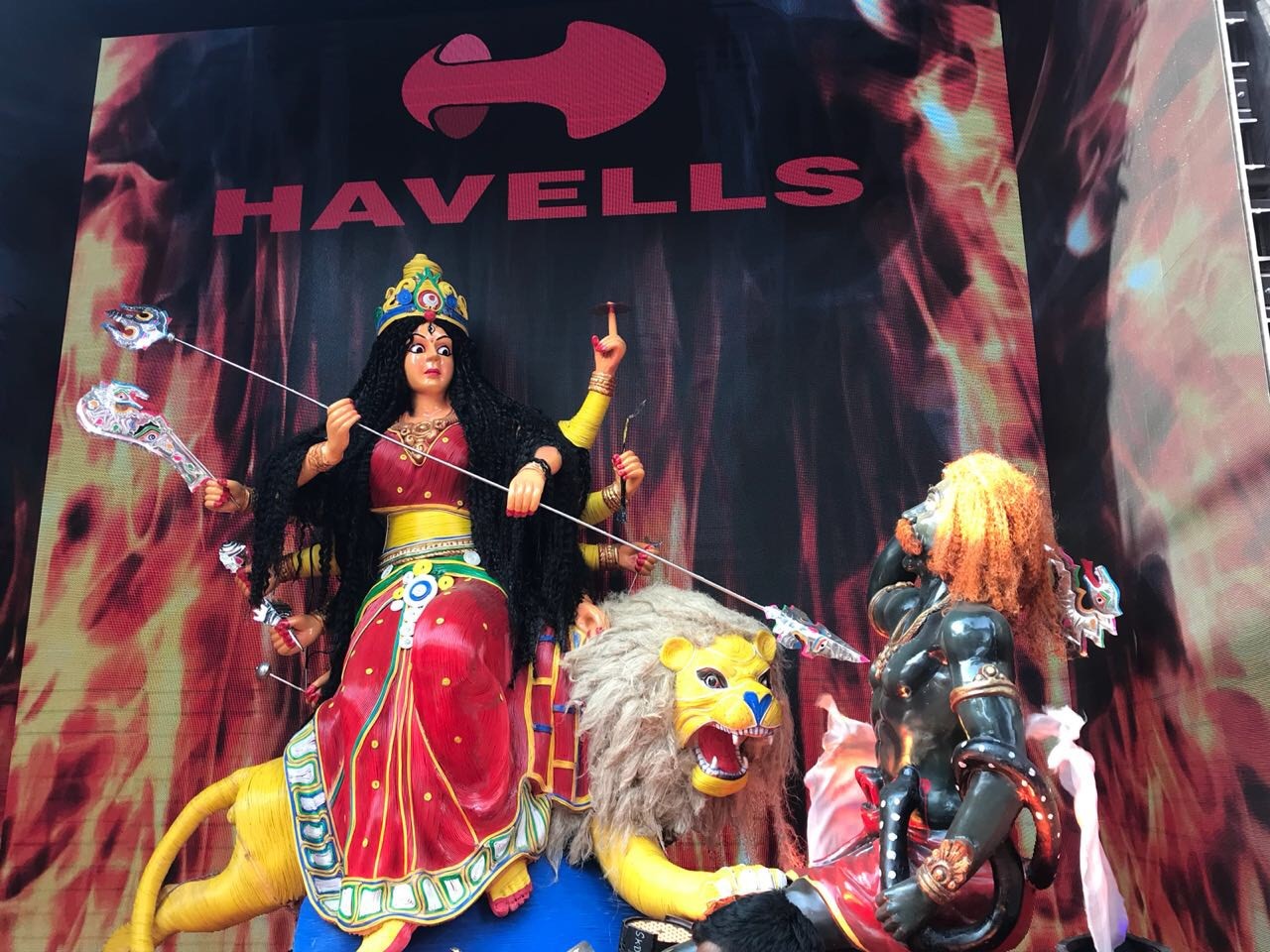 Durga Puja celebrates the victory of Goddess Durga over the powerful buffalo demon Mahishasura. So, the festival essentially marks the victory of good over evil, but it’s also a harvest festival that celebrates the Goddess as the power behind creation of life in the universe. The primary goddess revered during Durga Puja is Durga, while the other being Lakshmi (goddess of wealth, prosperity), Saraswati (goddess of knowledge and music), Ganesha (god of good beginnings) and Kartikeya (god of war).

During the festival of Ashvin Navratri, Durga Pooja begins on the sixth day when the Goddess is welcomed and worshipped while the celebrations commence in exquisitely decorated temples and pandals hosting the statues. On the seventh and eighth day of the Navratri, Goddess Lakshmi and Goddess Saraswati are revered with much enthusiasm. The festival concludes on the tenth day i.e; Vijaya Dashami, with a procession carrying the clay statues to a river or ocean to immerse them.

Havells Participates in the Durga Puja Celebrations in Kolkata

Havells – with a faith that Goddess Durga will destroy all the problems and bring happiness to the people – has made an effort to bring safety, security and strength (traits that represent the Goddess) through its advanced wires in the life of everyone. We all know that wires – even though hidden – make an important infrastructural aspect of any building. Thus, to ensure complete safety, installing first-rate wires like that of Havells is logical for the security of your loved ones, electrical circuitry, appliances and of course, home.

This Durga Puja, in Kolkata, Havells has participated in the festivities with its larger than life installation of Maa Durga made of Havells wires (representing safety, security and strength). The humanoid instillation will be live (functional) and motorized, wherein the demon Mahishasur at the feet of the Goddess will be emitting raging fire (which uses holographic technology bringing the visuals to the next level).

In this representation, people can engage with the installation via Vocal Hammer. Accordingly when the crowd will cheer up requesting the Goddess to kill the fiery demon with her Trident (made of wires), the trident will rise to kill the demon. The louder the cheer, the higher the trident will rise. On crossing the threshold, Maa Durga will finally kill Mahishasur with her trident, destroying the fire of insecurity. The whole concept represents the strength of the Goddess in form of wires, while conveying the message of Havells wires – Wires that don’t catch fire!

With a sincere wish that Goddess Durga destroys all the negative powers and brings security, safety and strength in everyone’s life, Havells wishes a very Happy Durga Puja to all!